“How can you help us next?” Kevin Feng, head organizer of the 2016 Asian Humanism Conference, asked the people and volunteers gathered around for a post conference meeting. Kevin, a recent college grad currently serving his time in the military, has spent the last six months preparing for the conference, and yet his focus is already on the future.

This August 6th and 7th Humanists from across Asia came together in Taipei, Taiwan, at the nation’s most prestigious university, National Taiwan University, to discuss Humanism and Humanistic values at the 2016 Asian Humanism Conference. The event’s theme was Old and New: Timeless Solutions to Modern Challenges, a theme meant to highlight both the richness of Humanist thought in Asia’s past and to highlight the vibrancy of Humanist activism in Asia presently.

Nearly 50 people attended the conference, with roughly equal numbers of attendees from within Taiwan and traveling from abroad. In total, people from 14 countries were in attendance or helped during the organization process.

East Asia, typically defined as the countries of Taiwan, China, Japan, the Koreas, and Mongolia, is one of the most populous on Earth, as well as one of the least religious. Yet, it’s still a region affected by dogmatic regimes and in some places lacking in the rights and freedoms Humanists fight for. By holding the conference in Taiwan, IHEYO is helping to give a platform to and raise the voices of local Humanists and Humanist organizations so that they may better work toward advancing the cause of Humanism and fight for human rights in the region. Bringing the conference to Taiwan

The story of bringing this conference to Taiwan is one several years in the making. Majority ex-pat groups like Taichung Skeptics in the Pub and Taichung Atheist, Freethinkers, and Humanists and the work that they have done over the past few years has elevated the place of Taiwan in the mind of many Humanists internationally. At the same time, Taiwanese groups and individuals, like the Taiwan Humanism Studio, Positive Atheism on YouTube, and the Ming-Jing Education Association, have worked to promote Humanistic values and critical thought here in Taiwan. The groups came together when the Taichung groups offered financial support to an event held on National Sun Yat-Sen University in Kaohsiung.

“I can totally feel their passion and really appreciated it,” said Feng of the groups’ cooperation.

When founder of Taichung Skeptics in the Pub, Wade Kaardal, became chairperson of the Asian Working Group of IHEYO it was his job in part to determine where to hold the 2016 conference. Having already made the connections, the Taichung groups and the Taiwanese organizations were able to form a coalition which successfully bidded for and received the right to hold the conference here in Taiwan. “This conference marked the moment when humanism sprouted in Taiwan. Through the conference, we gathered local atheists, skeptics, and humanists to build a team and joined the international group—IHEYO,” said Feng.

The speakers at this year’s event came from a wide variety of countries and backgrounds, including authors, activists, and leaders of organizations in and around Asia. IHEYO members spoke on their countries’ history and humanist movements, as well as feminism and the power of narrative. Other speakers shared their thoughts and research on what humanism was, what it could learn from indigenous peoples and skeptics, and where the movement was going.

On many people’s minds was the danger of being a Humanist in Asia. Canadian author and speaker, Jason Sylvester, said of blasphemy laws in the region, “Michael Sherlock(another author in attendance) and I could be killed in some of these countries for the things we’ve written.” The situation is not completely hopeless though as technology has created an opportunity for Humanists to connect and share ideas. One attendee from Pakistan said, “With the Internet, social and electronic media coverage, many people are now openly questioning religious and security doctrines of the establishment...many educated people are are now seeking secular and humanistic solutions to the long standing illnesses of dogmatic regimes.”

Danielle Hill, speaker and Youth Coordinator of the Humanist Alliance Philippines, International, said “Where are the prominent Humanists that look like those of you from Taiwan, or the Philippines, or Pakistan?” Comments like this set an unofficial theme for the conference, that of “Toward an Asian Humanism.” Many attendees acknowledged the need to help raise the voices of prominent Asian Humanists, past and present, and to start developing a Humanist tradition rooted firmly in Eastern thought and traditions, not to replace Western Humanism, but to add to and support it.

In a deeply personal discussion, several people who had left dogmatic religions, including an ex-Jehovah’s Witness minister, an ex-Catholic, and an ex-Church of Christ Christian, shared their experiences with attendees. For some, it was their first time interacting with and hearing from ex-believers.

“Don’t you feel lonely on weekends now?” one attendee asked of the panelists. 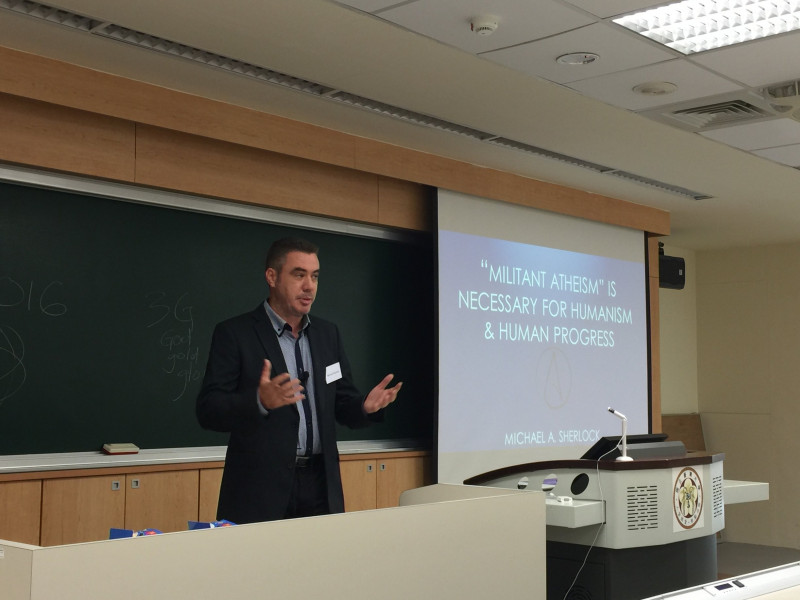 The conference organizing committee, made up of mostly Taiwanese volunteers, has gained an immense amount of skill and experience in event organization which they will draw upon going forward. They were able to organize and manage the conference successfully as well as secure a grant for the event from the Ministry of Foreign Affairs. They also helped to arrange an electronic Visa for members who would have had to travel to Saudi Arabia, a dangerous place for any Humanist, to receive their Visa otherwise.

For the organizers, the conference is only the beginning. Speaking on Taiwan’s need for Humanism, Feng had this to say, “Taiwan is one of the most ethnically and religiously diverse countries in the world. Nonbelievers can live happily in Taiwan because of the widely ensured religious freedom. However, conflicts between religion and the secular have been going on over the past few years. Moreover, ethnic issues surfaced after the change of Taiwan’s ruling party in 2016: these are ethnic issues that concern the Chinese, post-war immigrants, immigrants from Southeast Asia, the Hoklo Taiwanese, the Hakkas, and the indigenous peoples. Humanism, which bases itself on the species level and surpasses all demographic and religious labels, is the key solution to those problems.”

You can expect to see more Humanism in Taiwan in the future. Groups like Taichung Atheists, Freethinkers, Humanists will continue to make appearances at events around Taichung, but they will be joined by Taiwanese newly recruited and passionate about Humanism. Taiwan Humanism Studio is working with local volunteers to bring Director Chris Johnson, director of a film about non-believers and Humanists to Taiwan. The groups will also begin working together on a campaign promoting Humanist values in Taiwan. With the skills and experience they gained from the 2016 Asian Humanism Conference, the groups are off to a good start in achieving their goals.

The future is hopeful for Kevin Feng and humanists in Taiwan, “I look forward to our team’s work on promoting humanism on this island.”

Taiwan humanism
Back to Articles See Next Article Wade is an English Teacher in Taichung and the Chairperson of the Asian Working Group of the international humanist organization, IHEYO