Hiking in the Dakeng area can be absolutely fantastic. It can also be a pretty sorry experience. There are a variety of different trails, each with their own features. Hopefully this short guide will help you find a trail that you enjoy.

There are two sections of numbered trails in the Dakeng area. Trails one to five are out  west, and climb Tou-ke Mountain. While these trails will certainly give you some good exercise, and offer outstanding views, (to the Taiwan Strait on a clear day) you will be walking almost the whole time on large wooden logs. These are not particularly pleasant to walk on, and definitely not recommended for dogs. If you are looking for more challenging trails, drive on to Guguan, and hit the Seven Heroes. (Off the Beaten Track has an excellent web page covering these hikes) Therefore, this article will concentrate on the other trails in the area. 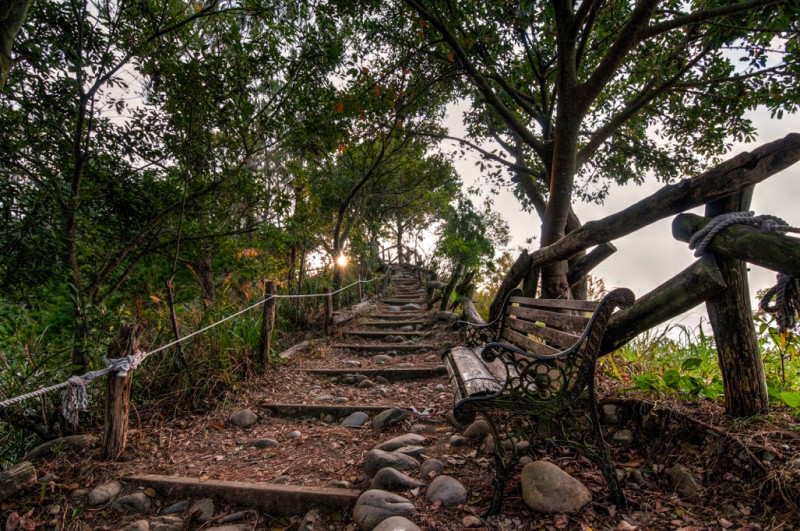 The other section of numbered trails, six to ten, are to the north of Song Zhu and Dong Shan Roads. These trails are shorter and less steep than trails one to five, and are for the most part not built of logs.

The trailheads for trails six, seven and eight are close together on Lane 350, which connects with Song Zhu Road, and initially runs through a cemetery. The turn-off for trails six and seven is signposted, (Chinese only) and the narrow lane ends at a decent sized car park with bathrooms. Trail six is to the right, and is probably the nicest of the numbered trails. It starts off as stone steps, but soon turns to wood with areas of dirt trail mixed in. 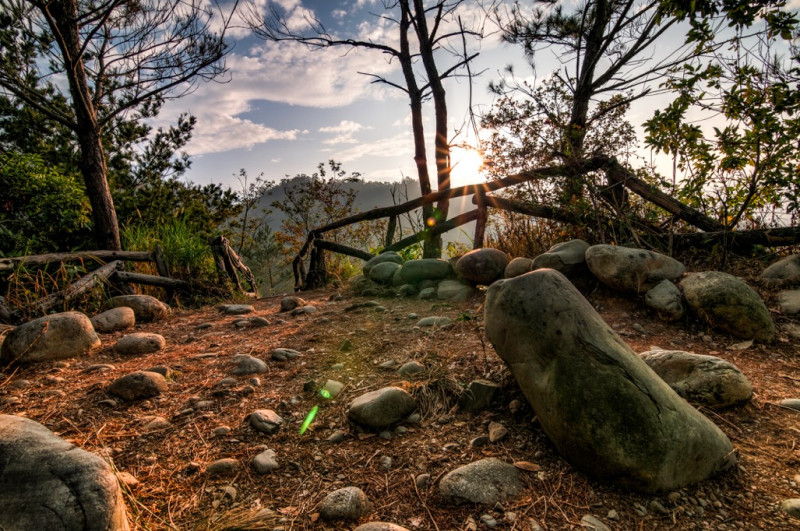 As you are reaching the top of this first section, there is a viewing platform, and shortly after you have the choice of bearing left, and coming out on the road, or climbing a long flight of wooden steps. These steps need only be climbed by people who really enjoy climbing steps. Following either route, you will find yourself at the Guan Yin Pavilion, a large temple area with covered seating, drinking water machines and bathrooms. From here, you have several choices. Trail six continues north along the ridge to its meeting with the seven and eight.  It’s a mixture of wooden steps and some pretty rough ground, and feels like a proper hiking trail. You can also head right and south on the paved road, which will take you to the meeting point of trails nine and ten. Alternatively, you can walk a short distance down the road leading back to the parking lot, and then turn onto a small trail on the right, opposite a blue metal gate. These unnumbered trails make hiking this area so enjoyable. This trail climbs up then drops down onto trail seven. From here you can turn left back to the car park or continue right.

Trail seven itself starts on the left just as you are coming into the parking lot, and begins as a steep concrete pathway. It flattens out into a pleasant, open trail following the side of the ridge, surfaced with large roughly laid stones. Eventually, it crosses a small wooden bridge, and starts to gently climb up to its meeting point with trails six and eight and to Wind-Moving Rock. Just after the bridge there is another unmarked trail, this time to the left. Following this trail, you will soon see a small house on your right. Just after this, the trail divides. The left fork is a beautiful little trail to the eight, while the right fork climbs the hill and rejoins the seven just before the top. Where the trails meet there is the inevitable temple/pavilion complex (with bathrooms). Trail eight begins further north on Lane 350. There is no parking area here, and the road is pretty narrow, so it’s probably best reached by scooter. The trail itself is unspectacular and unlike the other trails, not dog-friendly. The lower reaches are paved and flat, but after a few hundred meters you hit a section of logs. From here it climbs, not too steeply for a couple of hundred meters more. The final section up to Wind Moving Rock is wooden steps, and has a couple of OK views back towards Tanzi. Near the top of the log section, across from one of the shacks that the locals have built as their hang-out spots, you will see the trail on the right that leads back to the seven. (It’s the first trail coming up, and the second coming down). If you are descending the eight, you will have to hike a short section of this log section to reach the side trail, but luckily it’s not too steep and there is plenty of room for dogs to run alongside. 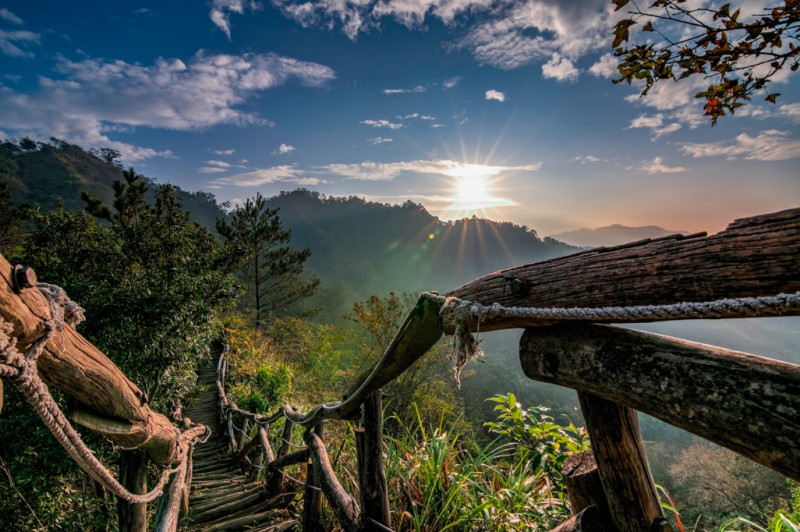 Wind-Moving Rock itself offers spectacular views of the whole Taichung Basin. There is a fence, but it’s fine to climb up onto the rock, and it’s probably the best place in Dakeng to watch the lights come on over the city.

The main point of access for trails nine and ten is off Dong Shan Road, at the Earthquake Park. After passing through the parking area, you will see the signs for the trails. Trail nine is mostly paved, and is lined by a lot of stalls, selling everything from fruit to real estate (Seriously).  As the trail climbs it becomes quieter. At the crest of the ridge it swings east and continues past the intersection with the 9-1 until it becomes a good climb up a long flight of wooden steps. To avoid some of the chaos on the lower part of trail nine, an alternative, the 9-1 continues straight on past the nine and ten turnoffs. It’s a little quieter than the nine, but you will miss a fantastic view of Tanzi from the ridge. Where the nine and ten meet you can continue on up the road to the north for about five minutes until you come to the six.

Trail ten is on the right side, and begins with a long set of steps. The whole of the ten is like this; you go up steps, then you go down steps, then up again. It’s a good workout, but the long flights of stairs can easily get blocked on weekends.

While the nine and ten are a bit of a zoo in the daytime, after dark it’s a different story. The trails are deserted, and if you feel like a night-time hike, this is the trail to try.

The final trail in this area, known to locals as the temple trail, starts on Bu Zi road, just before the 7-11. There is a large green hand sculpture that marks where the trail starts. These concrete steps quickly give way to a dirt trail. Unlike the other trails in the area, it has very much a “home-made’ feel to it, with steps and railings made from whatever was at hand. The trail climbs steadily, then quite steeply, up to the temple buildings at the top. Down a couple of steps there is a large open area with water and great views to the south and west.

Continuing on down the road, which is lined with Guan Yin statues, you will see a dirt trail on the left leading to a flight of steps going down. Alternatively, you can walk down the road for a couple of minutes and take the second dirt track to the left and rejoin the main trail at the bottom of the steps. The trail to the left drops to the river and then lets out at a temple, while the main trail immediately climbs again, before flattening out. There is a water tower on the right, and behind it a trail runs down the other side of the ridge. This trail rejoins the road descending from the temple. Meanwhile, back on the main trail, after about a hundred meters there is a fork. The lower trail, to the left has a side trail which takes you down to a paved lane. This lane is actually a loop, and either way will return you to Heng Keng Lane and back to Dakeng village. Further on, where  the main trails rejoin, the concrete steps take you down to the lane, or you can continue on up the final climb. At the top there is a small shrine under a tree. This is the end of the trail. It’s a pretty gentle descent from here along the path to the left and onto the paved lane. From here it’s quicker to follow the lane down to the right and up again. There are sometimes small groups of dogs around here. They may occasionally bark at other dogs, but they won’t attack, and will back off if you give them a stern look. Hiking in this direction, you return to your starting point along Heng Keng Lane, through the market.

Now get your walking boots on!

Buy us a coffee Become a Patron!
exercise hiking dakeng mountains
Back to Articles See Next Article 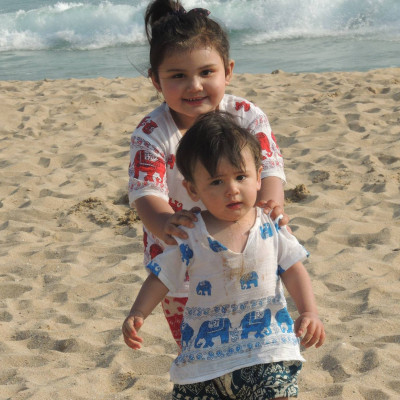