If you drive east from Magong, along the sweeping 204 highway, you’ll pass the airport, and perhaps duck inadvertently in your seat as a plane swoops in from the sea, practically scraping the roof of your car. Keep going for another ten minutes or so and you’ll eventually reach the small village of Longmen, which literally translates as ‘Dragon Gate’; a pretty dramatic, Tolkienesque name for this modest little fishing village. There’s not much to see here, but if you continue through you’ll find yourself in the ‘Longmen Coastal Park’, a wild, rugged stretch of coastline, especially in the winter months as the famous Dong Bei Feng batters its rocky shores. During this time it makes for a bleak, romantic landscape, long grass laid flat by the wind, the occasional malnourished bovine inhabitant chewing stoically on his salty cud, the sea whipped into a frothy frenzy of  white horses galloping towards the shore. As you make your way along the narrow bicycle path which serves as a road (I’ve never seen anyone riding a bike here) you might spot some brave windsurfers flying across, or sometimes above, the raging sea. Unfortunately, you’ll probably be distracted by a less picturesque sight: Rubbish.

Great piles of it line the path on either side, and as you pan your head in dismay you’ll see the beaches encrusted with garbage, much of it tangled in driftwood. The tides deposit a grim, endless bounty of plastic which the strong winds then force inland, until it’s snagged in bushes and trees, where it thrashes and flaps like birds on barbed-wire. The whole east coast of Penghu is a mess. This isn’t something I normally talk about, because to be honest, I’m a bit embarrassed by the state of it. I avoid taking visitors here because I want them to go home with their image of pristine beaches and unspoiled beauty intact. Talking about this is like a movie star admitting they have an embarrassing health problem, bad breath or erectile dysfunction. Not pretty, but probably necessary.  The first step to solving a problem is, after all, admitting there is one.

This has been brewing for some time at the back of my mind, but it took Greenpeace’s visit two weeks ago to really bring it to the fore and persuade me to get off my apathetic backside and write about it. The fact that those guys visited my little island on their Rainbow Warrior was a source of both pride and shame. It’s a dubious honour to have a crew of international activists sail around the world to come and clean up your beaches for you. I felt both grateful to them and annoyed at the government here for allowing the situation to become bad enough to appear on the radar of organisations like Greenpeace.

I have, so far, done my best to sing the praises of my adopted home. Like a royal portrait painter doing his best to capture his subject in the most favourable way, using soft, flattering lighting and smoothing out the blemishes with light brush stokes, I’ve tried to tell a story of Penghu as a mystical paradise of idyllic beaches and windswept seascapes. After all, I love this place and my life here. I want people to come here, to experience its delights, to dip in its waters. It’s not perfect but then again, where is? There’s enough ugliness in the world without me adding to it. While I’ve been out on my adventures around Penghu, I’ve often had to frame my photos carefully. To actively exclude the rubbish. The garbage. The trash. The plastic tide. Sometimes it’s been so prevalent I’ve had to abandon the photo altogether, such is the blight on the lens. I’ve sent my drone up to capture videos of cliffs and rugged coastline only to realise when I checked the footage later that entire bays were chock full of rubbish and the clip was unusable.  That’s meant that I’ve been prickled by the occasional bout of cognitive dissonance, that uncomfortable sensation of balancing two opposing viewpoints and not being entirely honest. In my defence, when I started this piece we were in the heady heights of a Penghuean summer and I was spending my days sunning myself and swimming in blue seas. Now, in the depths of winter, with grey skies, a vitamin D deficiency and 100mg of caffeine moving through my veins, I’m more incline to go there.  To take you to the dark side of Penghu. I may not win any friends at the Tourist Bureau, but I think it’s necessary and important to talk about Penghu’s pollution problem and, more specifically, its plastic beaches. Not just talk about, but show you.

I should point out at this juncture that Penghu is, of course, by no means alone in its struggle. Plastic in the ocean is a global crisis. If you follow the news you’ll have seen photos of desert islands in the pacific that are utterly swamped by it. In fact, there are entire islands made of plastic floating around out there. It’s such an enormous problem that a report by the Ellen MacArthur Foundation predicts that by 2050 there will be more plastic than fish in the ocean. It’s reaching every corner, every nook and cranny, from the bottom of the Mariana Trench to the stomachs of pilot whales. The fact that we don’t collectively seem to care about the issue as much as we should probably stems from the fact that, as long as it’s out there, we don’t have to look at it. The ocean is the ultimate rug for sweeping stuff under. Until, that is, when it ends up in our food supply and on our beaches, where we’re forced to look at it and squirm as our past wastefulness comes back to haunt us. As you can see from the photos, in Penghu’s case the pollution is hiding in plain sight and it most definitely is our problem. Our chickens are home, roosting and shitting everywhere. The rug has been lifted and what’s underneath is not pretty.

I’m somewhat hesitant to play the blame game here and start pointing my ill-informed finger. Research indicates that the vast majority of rubbish on the beaches here in Taiwan isn’t locally produced but comes from China, the Philippines and other Asian countries. My own, unscientific observations of rubbish on the beaches here seems to confirm that. Among the plastic bottles and packaging I noticed that practically all the labels displayed brands I have never heard of. Regardless of its origin however, the rubbish is here now, and Penghu/Taiwan needs to deal with it. Simply leaving it strewn across the landscape is no answer and certainly, some of the waste is local. Taiwan takes pride in its recycling efforts, with daily collections and a lot of time and energy invested into sorting and processing waste from households. The arrival of the musical garbage trucks every evening is a cultural phenomenon, as men and women, young and old, rich and poor all spill out onto the streets, laden with bags of carefully separated household waste. There is a cultural expectation that you deal with your own rubbish, unlike in other countries where you simply throw stuff in the bin and somebody else comes and empties it for you. But that seems to have led to a situation where nobody  takes ownership or responsibility for rubbish that collects in public areas, in parks, by roads, on beaches. Fly-tipping in out-of-the-way spots is endemic here and I’ve had many a seaside walk spoiled by the sudden intrusion of a broken toilet or discarded refrigerator.

While I was discussing the possibility that this will be taken as an unfair criticism of Penghu, a friend told me, “It’s not a criticism, it’s a reality.” Most holiday makers only visit a handful of beaches, mostly south-facing, that are kept largely spotless by local beach cleaners. Other places don’t make it onto the postcards, and are far enough off the beaten track to get few visitors. Such places, like the Longmen Coastal Park, have been left to their own devices, visited only occasionally by sporadic ‘clean-ups’ which are normally organised by charities and composed of volunteers. The government may or may not have its own programs, but it seems obvious that their efforts are not enough. When I spoke to one of my students about the issue recently, they shrugged and said “The government does try to clean it up but more appears the next day.” The reply I bit back was, “Well, they need to bloody well try harder.”  If the magnitude of problem increases, then so must the response to it. Going out to clean beaches in freezing, 40 knot winds is nobody’s idea of a good time and relying on volunteers and press-ganged school children, equipped with a few bin-liners, gardening gloves and a hatchback car is unreasonable and unrealistic. We’re not talking about a few crisp packets and the odd beer can here. There are enormous rusted barrels containing God knows what, syringes and medical waste, huge buoys I can barely lift and fishing nets that tangle hundreds of metres worth of other rubbish. The scale of the operation needs ramping up. Call in the army, bring in the professionals. The mammoth task doesn’t get any smaller by ignoring it.

It’s hard to effect change, but I hope the pictures I share here today can help shine a spotlight, even if it’s only a small one, on Penghu’s plastic problem. Please share this article,  so it can reach a wider audience. And, next time you go the beach, pick up a piece of trash. Or two. Let’s get our beaches looking like the first five seconds of the video below. 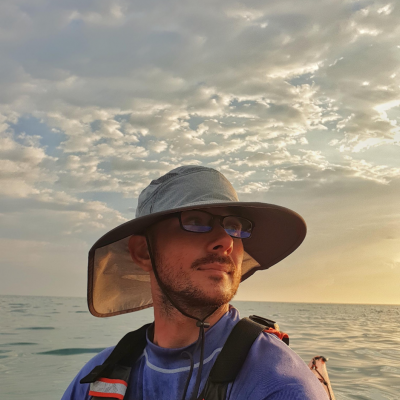 Writer, teacher and adventure-loving Englishman living on the islands of Penghu, Taiwan.