Quick Quiz: What do Meeples, D20s and Mini’s have in common?

They are all part of the neo-revolution that has been happening for the past decade in the traditional hobby of board gaming, now re-branded as TableTop Gaming (for cool gamers).  If the last board game you played was Risk, Trivial Pursuit, Life or - god forbid - Monopoly, you are in for a bit of a shock since TableTops have come a LONG way in attracting more mainstream 'normals' (think non-gaming muggles) who now actively love to play them.

Traditionally, board games were too often thought of as 'bored' games - meaning you played them when you were bored and had nothing else to do. Most were 'roll & move' where your action was determined by luck on how far you could move based on a 6 sided dice, and then something happened to you when you landed on your square. They were also thought to be for 'kids'; no self respecting adult would play them, except when their kids pleaded with them to play and then only grudgingly. Afterwards tears usually flowed, tempers flared and grudges grinded with the players each time.  How could that be fun?

But if anything has changed in the past few decades, it is the attitude towards gaming as well as the games themselves.  More people are embracing games for the simple fact that they are now ubiquitous in our lives. No other industry has seen the growth that the gaming industry has (and this will continue). To be fair, most of this escapism is based on snazzy graphics for computer, hand held and consol games. Most likely you have tried an RPG or FPS, Wii game or app game like Candy Crush. But perhaps now you may have also heard about a few of the myriad TableTop games that are popping up.

With this new era of TableTop games, positive social awareness is also blossoming.  Alongside computer games and shops that market to online gamers staring at a screen, there has been a worldwide upsurge (and especially in Taiwan) in “Board Game Café’s.” It is cool again to socialize and meet up with friends or other gamers, have a bite to eat, down a coffee or beer and commence to beat the crap out of them with sneaky strategic scenarios ranging from puzzle-like tile placement in Carcassonne, wielding foam guns to shoot them in Cash & Guns, taking the helm of the Millennium Falcon to blast their TIE fighter in X-Wing, or offering them a brash trade in the game that started the revolution: Settlers of Catan.  Or, if you are more of a team player, there are many unique cooperative games that you work together against the scenario itself. It quickly becomes clear that these are not your parents’ games.  Many are much more complex than their predecessors for the simple fact that ‘luck’ is often phased out making them now games of skill and strategy.  However, this does not mean serious and daunting.  While some Tabletops take upwards of 2-4 hours to complete, there are many that play in under 30 minutes (making them great teaching aids, but that is another topic).  The time spent learning and playing is usually worth it since they are really FUN. 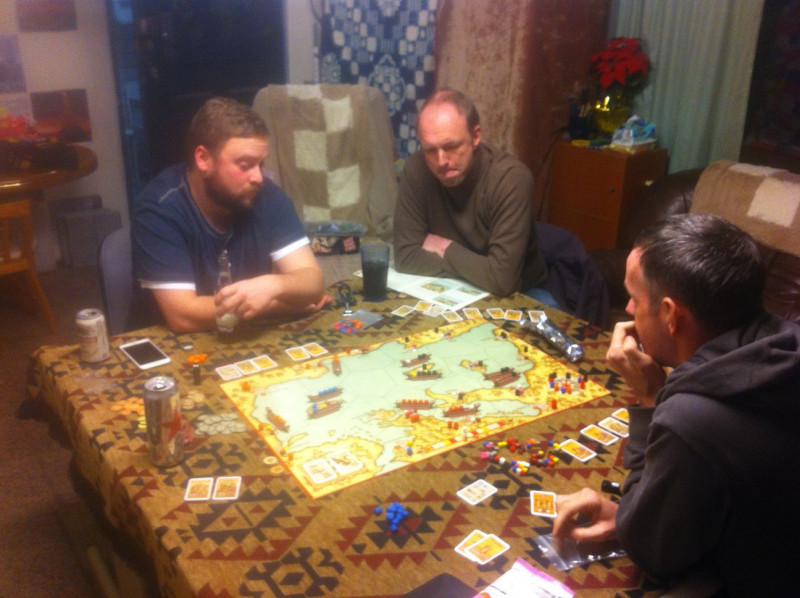 If you have been feeling bored or stale recently and are looking for a cool hobby to share with friends or like-minded individuals, TableTopping is a great way to spend a few hours (or much more for some of us).  Join us on FB at Taichung TableTop Gamers to find a game café near you as well as learn about new games.  Also, you can check out our FB event page at Taichung TableTop to keep abreast of larger gaming meet-ups, kick-ass competitions and awesome activities.

We look forward to playing with you.  Now, go get yer game on!

tabletop games Taiwan
Back to Articles See Next Article