There are apparently two subjects which should never be broached in polite conversation: politics and religion. However, there’s no denying that the two in combination can be massively influential in our lives. For example, try to think of a non-religious politician in the USA. Move to another highly religious nation, Italy, and we see the same mix of politics and religion at the very highest levels but with another complicating factor - organised crime.

Few visitors to Taiwan would put religion or gangsters on their list of things to watch out for in terms of political action. Although now ranked as the country with the second-highest religious diversity according to The Pew Centre, religion here is a far less visible force than in many other areas. Religious belief tends to be more a pick-and-choose mixture of superstition, folk belief and ‘real’ religions rather than a zealous, dogmatic affair. Taiwan has also been ranked as the second-safest country in the world according to a 2014 survey. Such recognition, testified to by many citizens and long-term visitors, would seem to suggest that organised crime is not a real issue. 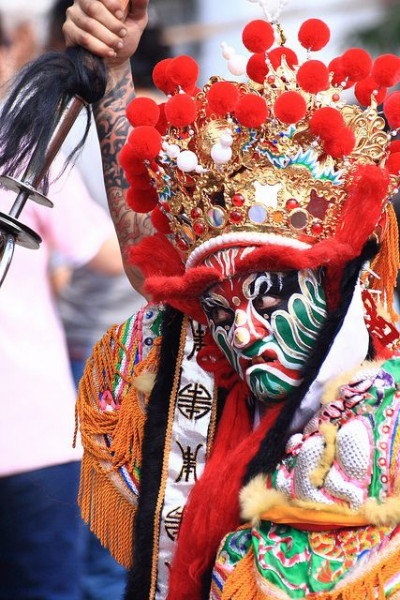 It therefore comes as a surprise to many to find out that politics, religion and organised crime have a complicated relationship which exerts a heavy influence, particularly at the local level. The most obvious manifestation of this arises through an examination of the Mazu temples which cover the island. In order to understand why they lie at the centre of this unholy trinity it’s best to take a quick look at the history of Mazu worship here and how it has reached the point of having around 1,000 temples in such a small area.

Mazu worship originated around 1,000 years ago in the Fujian region of China. Mazu was a daughter of a fishing family and apparently saved members of her family from drowning at sea while in a trance on shore - she then became mythologised as a good daughter and protector of fishermen. Some 150 years later, a Chinese official Lu Yundi claimed to have seen Mazu floating above his ship during a storm, saving it from capsizing. She was then elevated to position of goddess by the Emperor. When Han Chinese, mostly from Fujian, began their exodus to Taiwan in the 17th Century they took their goddess with them. Mazu worship helped to form the backbone of immigrant communities on the islands, the temples acting as a focus for social gatherings, communication and administration.

In the ensuing centuries, Mazu temples cemented their place as local political centres. Due to exerting such influence on local communities their power was much sought after, with the state often seeking to control them while local peoples, often resentful of state intrusion, sought to retain their own hold on them.
Following World War 2 and the occupation of Taiwan by the army of the Republic Of China, the new KMT leadership instituted a pointedly secular mode of governance which, mindful of the role of religion in local politics and identity, sought to minimise its effects. Two results of this ‘modernisation’ were the introduction of temple management boards and a push by the KMT to co-opt local elites in order to harness political influence throughout the country.

The newly-created temple boards did indeed diminish the temples’ sense of community. However the democratic element made them a potent force for local elites to consolidate and spread their power. They could, through money, deeds and other methods, effectively monopolise power in their local temple and use this to further their political ends. It takes little imagination to see how attractive this arrangement could be to local gangs which began really rising to prominence in Taiwanese politics following the wave of immigration spurred by the ROC. Organised crime groups, displaced from their previous areas of operation, quickly realised that they had ready-made networks in the form of the Mazu temples and the influence they bestowed. This opportunity was not passed up and rival factions fought for prominence using money, intimidation and violence where necessary. One aspect vital to understanding the rise in prominence of particular temples such as Zhen Lan Gong in Dajia is that of the pilgrimage. Mazu temples form a hierarchical network in a very real sense. The efficacy (‘ling’) of a given temple depends on the closeness of its relationship with more powerful temples, the most powerful being Meizhou in China. The ritual of pilgrimage and splitting incense strengthens the bond and thus increases ling, attracting more worshippers to that temple.

Towards the end of the martial law era, in 1987, the board of Zhen Lan Gong temple organised a pilgrimage to Mei Zhou, resulting in Zhen Lan Gong becoming the most powerful temple in Taiwan. This trip was illegal at the time but the political power enjoyed by the temple board allowed them to proceed without fear of government censure.

The money-making ability of a powerful temple is not to be underestimated. By some guesses the annual Dajia Mazu pilgrimage attracts millions of worshippers and onlookers along its route. Its accompanying prestige now results in actual violent altercations between gangs in Changhua as they seek to rob the palanquin carrying her image. The temple at Zhen Lan Gong itself boasts some 100,000 patrons and its coffers register in the tens of millions. So the point we reach following the end of the martial law era is a network of temples blanketing the country. Their influence and fame, even among non-believers, is such that to ignore them on the campaign trail can be tantamount to political suicide. Votes can be bought and sold and political favours change hands at a dizzying rate. Local gang bosses act as middle men, providing favours for local communities in exchange for political support. This support is leveraged against national politicians and used to buy all manner of influence. The political career of Yan Qingbiao, long-time leader of the Zhenlangong temple, is testament to how far the power bestowed by a Mazu temple can go to wipe out past ‘transgressions’ in the eyes of the public. Even Ma Ying Jeou went so far as to enlist Yan’s support while trying to pass the ECFA treaty with Beijing in 2010.

Perhaps to a western eye, it’s surprising to witness the relationship between religion, politics and gangsters carried out completely in the open. Even more surprising is that areas where there is a larger organised crime presence in local politics can often tend to score higher on governance ratings. This could be due to a genuine concern for their local communities or perhaps as a result of the favours bestowed in order to secure their influence. Remarkably, there isn’t much complaining from locals about the situation. And while many worshippers do resent the co-option of their deity into such profane, earthly affairs, for most Taiwanese it has simply become a way of life. For an outsider it’s yet another unexpected aspect to an island full of surprises and one which rewards far more attention than such a small article can allow.

religion politics Taiwan mazu
Back to Articles See Next Article